Past projects and statements

You are here: Home / Our Programs / IAF Young Falconers Group / Past projects and statements

Throughout the last few years, the YFG has had the opportunity to celebrate a number of important anniversaries and events, below you may find some of the statements made on those occasions. 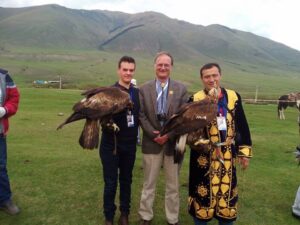 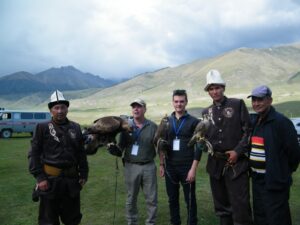 In 2016 Andrea Villa represent IAF at the World Nomad Games, an amazing event that took place in Kirghizistan, a beautiful country!

The IAF (International Association for Falconry and conservation of bird of prey) take cares from many  years the theme “youth” and involves in its association life a good number of young people, that hatch the passion for falconry. The young people who actively partecipate inside the association came from more than 80 differents counties all round the world, starting from wich countries that consider falconry as a normal part of the people’s life, and since childwood boys and girls grows up with a strong falconry education(in this countries, I am expecially thinking to Arab country, falconry is hand on from father to soo) sice countries in wich falconry is still forbidden or not well regulated.

The theme of youth sensibilization to the “Art of Falconry “ not only enclose pratising falconry, but also, reabilitation and conservation of the bird of prey is advanced by different members and working group constantly , starting from the big work that we all do in the schools. In some countries studing falconry is a part of the normal curriculum of the students, contra in others it’s only a extracurricula matter but in any case it is always appreciated from students, either from primary school either from university. From 2014 furthermore the IAF strongly suppors the creation of a working group made by young for other youngs, this is the” young falconers group”. That young falconers are encouraged to work inside the association actively on different themes. The sensitivity on this theme is so strong that the past edition of the World Falconry Day (in which we celebrate all around the world the recognition of falconry as a cultural entangible heritage on 16 November 2010)  in 2015 was dedicated to youth, the slogan was: Falconry and conservation for future generation . the support of the young falconers group  on  advertising this event was fundamental for the well  resolution its.The  “youth “ will be also the central goal for the next falconry festival which will be held in Abu Dhabi next december 2017 . this festival is one of the most important event at world about falconry and in the last editions reach a recod of participations.Involve young is an a ammonition we always hear from differents parties , but unfortunately ofthen actions doesn’t follow this good words. Indeed young are ofthen consider as a restaint and not a resource , becouse young needs time ! the author and head of young falconers group contrary has always found a positive attitude from the IAF members who strongly supported him, since his first participation ata the age of 18. For this reason from 2011 he work actively to allow other young people to do this experince , that was an important part of his life.The IAF strongly support  the CITES purpose for the next world wildlife day, and fo the next 3 of March advance  an on line  campain of sensibilisazion outbids the hastag “# youthforwildlife in falconry “. An on line event will be organised on our facebook page “ IAF youn Falconers” and on our website www. Iaf.org in which youngs will be called in and report their experience about conservation of birds of prey ( with falconry tecniques) Finally  we will also suggest to organise some local events in which young people can be involve on the theme of conservation, in particular IAF works from many year with the conservation of Saker falcon and of the Bonelli eagle in Italy.We are hopefuls that many young boy will participate to the world wildlife day and we are happy to contribute to the well issue of this day.

Here you may find a beautiful cartoon made by Alessandra Oliveto (WWG) and Anderson Manara.

From 2015 our association has a youth group inside his organic . The young falconers group was founded with the aim to promote falconry among young people using new technologies and media, like Facebook, Instagram ,ecc. There are many web pages that are daily updated by young ,man and woman, and  these are growing up very fast. From that moment a lot of young guys started to cooperate with us and  today there are many young people involved directly into the associative management . They manage  an incredible  and efficient translation group that works hard and every month realize an ebulletin , with a lot of interesting information. During the annual general meeting youth’ support is essential to provide assistance to the secretariat and to the delegates that attend the event. Youth engagement is already a very tangible reality  inside our association , young people are involved in different working groups , from Educational working group that is doing an amazing work advertising falconry among social events and schools (we must mention the international School link program and Falcon College) to Welfare and Ethics working group in which there are young people that cooperate for realizing useful papers about  falcons’ health .  We  have a women working group ,very active on socials and with a lot of followers and supporters.We already held an international event: “the Falconry Festival” in Abu Dhabi ,2017 in which we gave the opportunity to many young people to meet each other and share information, experiences and their love for falconry in a very unique experience! We are work on the next event in 2021 in which the main character will be again youth and woman , two categories that always exist but only now  seems their incredible potential has been discovered.we clearly keep in our minds that our is an intangible human heritage, it means that is in our hand and in our child’s hands the preservation of it.We believe in young for a better future for our art ! we strongly support them and their very hard work.So let’s celebrate together the international youth day !

The YFG has been collaborating with the celebration of WFD since its inception. 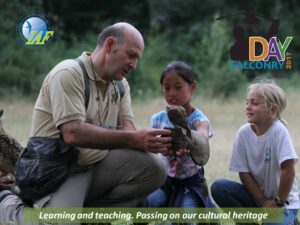 Every year on the 16th of November the recognition of falconry as an intangible cultural heritage of humanity by UNESCO is celebrated.

Thanks to: Gerardo and Santiago Del llano.

Here in Mexico, my dad has monitored for more than forty years different peregrine falcon nests in the Sierra Gorda of our state. During this time, he noticed a significant population decline in the number of active breeding pairs around 80%. In view of this population decline, he founded a reproductive center that aims to restore the population by reintroducing captive-born chicks.Our objective in this project is the release of four anatum peregrine falcon (Falco peregrinus anatum) born inside our facilities at the UMA “Mutti” located in the state of Querétaro, Mexico on the first day of April 2020.The project aims to: first , environmental education involving citizens, especially aimed at children and young people creating concience towards the environment. Second, the protection of historical monuments and third, the conservation and protection of this species through its reproduction in urban environments. We located the nest in the tower of the temple of San Francisco; and thanks to the rector Fr. Oscar Ponce we had the opportunity to carry out the project. The chicks have been monitored and fed daily with the common pigeon (Columba livia).During the last years, we have breed peregrine falcons in captivity with natural pairs (without artificial insemination) thinking of some way to be able to carry out its reproduction without chambers. Releasing the falcons at an early age allows them to recognize their territory by finding the tower as an available place to nest. To make this possible, we placed nests at favorable points, pretending that the falcons have available spaces, making it possible for people to observe and document a reproductive couple in the historic center of our city.The main goal for the couples is to settle down, breed and raise chicks that eventually return to the wild. A collateral effect of the presence of the hawk is the population decrease of the common pigeons that are one of the main causes of damage to historical monuments, not only by their excrement but by the carry of seeds that erodes the walls and historical structures of our city. We consider that the presence of two couples will keep their population balanced because falcons are able to select certain individuals, thus providing environmental services in the health of populations in the metropolitan area. We are aware of the danger this can present to the falcons. Falcons born in the wild face natural predators, however, in the city and in our country, the main predators are the poachers . Fortunately, the project and the falcons are under the approval of our state’s governor. 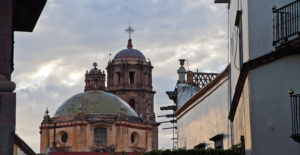 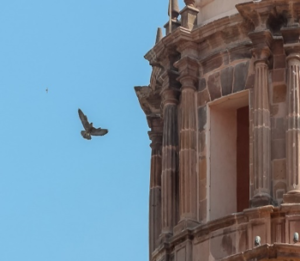 Figure A) Temple of San Francisco, Querétaro founded in the 16th century.

Figure B) Male of peregrine falcon arriving at the established nest calling the female with sounds of courtship. Due to the abundant food supply, we have noticed a change in the behavior of the hawks waiting for their possible reproduction in the following seasons.